Thank you for the comments on the bag.
I knitted another bag in the past, for the same daughter, and did not reinforce it. Big mistake. That's why I tried to do better this time.
I too thought it would take ages to knit. But how can you refuse a daughter's request? The nice surprise was that it is crochet, not knit. And bullions are quicker done with a crochet :-)
For the shape, style and color, Alexandrine Rohart is the one to congratulate.

I'm still in a knitting fever, hence going to a knitting tea party in Marseille yesterday. If I can manage driving in Marseille, parking in the busy streets is out of my scope. I decided to play is easy, and to park my car at the entry of Marseille. As the weather was sunny and mild, I walked to the tea room instead of taking the metro. A good opportunity to see streets I never go through.
Here are some pictures. 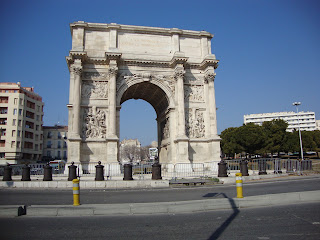 La Porte d'Aix: this arch was the end point of the road between Aix-en-Provence and Marseille. It is now the end of the highway.
It was started in 1784 to honour the King Louis XIV. The project was abandonned during the French Revolution, then the Napoleon era. It was resumed in 1823, to honour the royal family and French victories in general. It is now in the center of a very crowded and exotic quarter, with heavy traffic, that undergoes a major renovation right now. 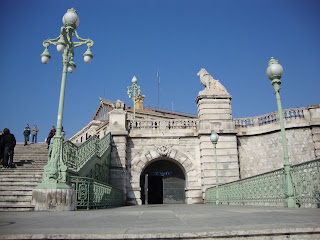 This is a glimpse at Saint-Charles station, the main train station. It is difficult to capture it, since the station is on the top of a hill, with monumental stairs. It is a symbol of Marseille. People would converge from the North of Europa to Marseille through this train station, to continue their trip to Africa and Middle-East. Around WWII Marseille was well known for songs and musicals, and the station was part of them. It is still a main station, with the TGV bringing travellers directly in the center of the town. 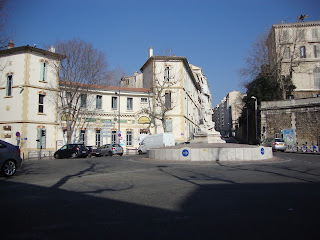 A view of an old school. 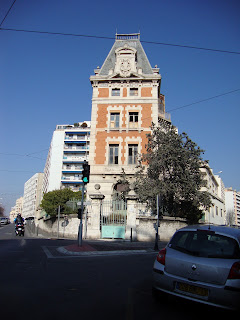 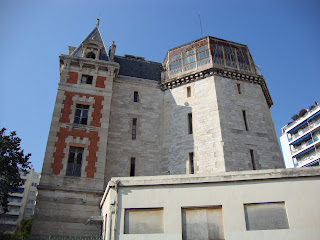 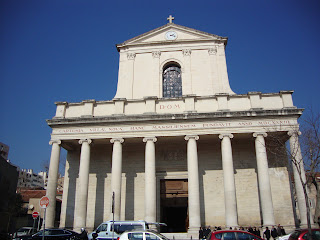 This is the Church of the Chartreux. It is not on the tourist route, although it deserves it. There was a funeral about to take place so I did not get inside. Maybe next time. Its story goes back to 1632, with hard  times during the French Revolution. 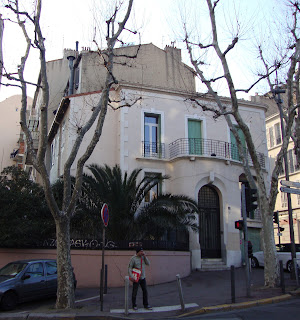 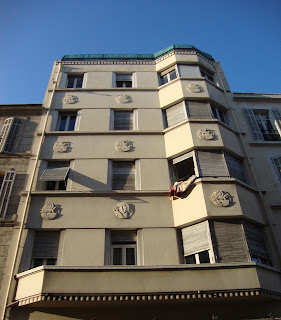 Two nice buildings on my way. 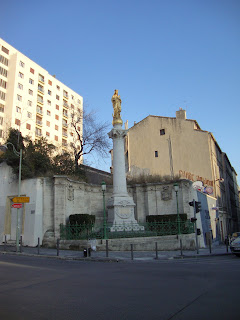 The Vierge Dorée was erected around 1857 to celebrate the dogma by Pope Pius IX about the Immaculate Conception of the Blessed Virgin Mary. It was originally erected where the stairs to Saint-Charles station are now. It was moved to the current place (not very far away) in 1922 to build those stairs, while keeping the Virgin inside the town. 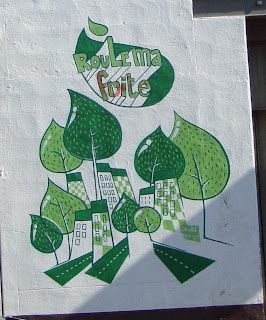 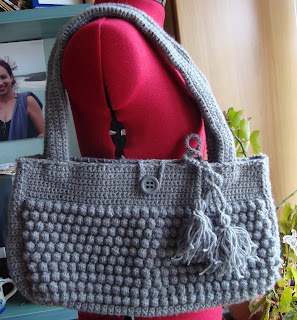 I rarely buy knitting kits, but Amandine fell in love with this bag... It was fun and quick to crochet.
In addition to the kit instructions, I've reinforced the straps and the top of the bag, knowing from experience that the weight will deform them. We'll see it that works.
Although it is finished, Amandine has to wait a little bit to receive it, until I go and visit her.
Publié par verobirdie à l'adresse 9:40 AM 12 comments:

The town where I work is called Aix en Provence, Aix stands for Aqua, or water, because of the many sources that can be found there, as fountains. This is how they looked yesterday: 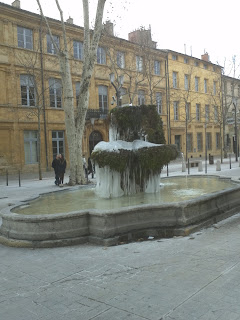 Believe me, this is not an usual view! (not only the frost, but also the emptiness of the street on a Saturday)
Publié par verobirdie à l'adresse 7:54 PM 7 comments:

Oh, oh, oh, I'm not pleased with Blogger. I received some of your comments, while others went another way. Since I received some, I assumed I received all. But I just discovered some in another folder, waiting for my approbation, without me knowing it.  I'm very sory for the delay, I was not blocking your comments on purpose. Please accept my apologies.

Our Christmas shopping brought us in the local Phildar shop, that is a shop where you can find yarns. And my daughters had a lot of WOWs. I love my daughters, I love yarns, so you guess how the story went. One of the chapters goes like this: 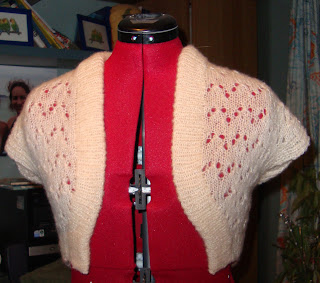 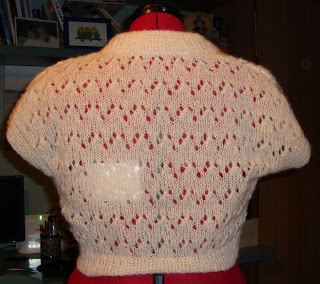 This is Boléro #12 from the winter 2011-12 limited edition Phildar booklet. Amandine asked me to use another yarn as the one given in the pattern. This one is very light, making this bolero a cloud of tenderness.

Have you noticed the button on my side bar, the one that says Hari-kuyo Needlebook E-Course? Do click this button, and let Susan explain about the broken needles in Japan. You'll love the story.
To go one step further, Susan proposes an e-course to make your own needles book. I love her work, and I'm sure this course will be a good one.

I hope you will have a nice weekend. Take care!

Up to now, the winter has been very mild. Almost no heating required up to now.
Then suddenly on Tuesday, snow made a quick appearance. No big deal in my area.
It was followed by a sunny but cold day, and even colder night.
Making the roads very slippery when it started to snow again this morning. No bus, and I'm not an expert driver, so I took the easy option of staying home.
It stopped snowing aroung 10 am, and it smelt right away. However, I had the time to take a few pictures. 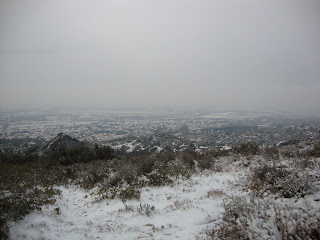 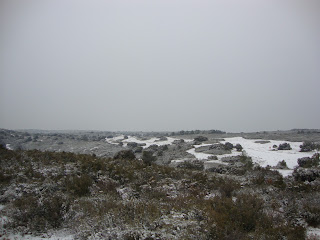 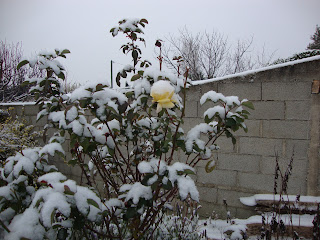 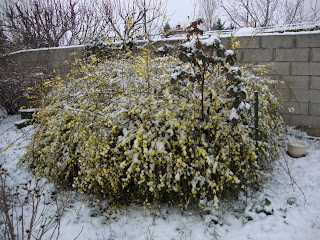 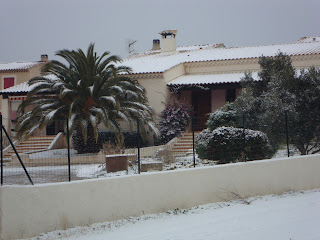 This one is not mine, just a house in the village.
Now is the time for a nice cup of tea!
Take care!
Publié par verobirdie à l'adresse 4:45 PM 7 comments: